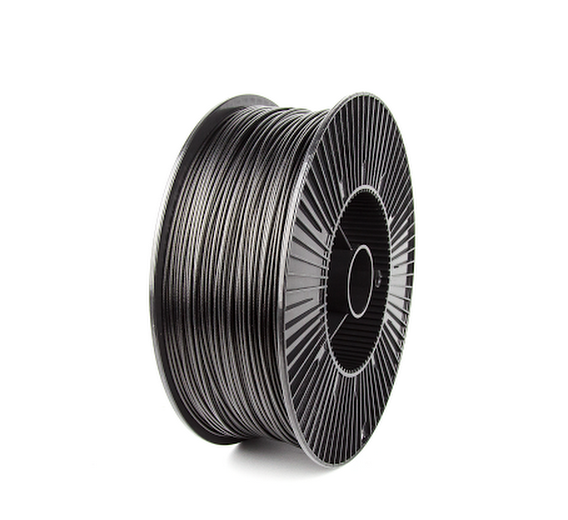 (1) Development and application of carbon fiber heating cables
People have known for a long time that electric heating technology using metal materials as heating elements has been widely used in various fields. However, the surface of the metal wire is easy to oxidize at a high temperature. Due to the continuous thickening of the oxide layer, the area for effective current passing is reduced, increasing the current load, and it is easy to burn. Under the same allowable current load area, the strength of the metal wire is 6-10 times lower than that of the carbon fiber, and it is easy to break during use. Carbon fiber is composed of a graphite hexagonal lattice layered structure, which is an all-black body material, so in electric heating applications, it exhibits high electrothermal conversion efficiency. Under certain conditions, high temperature does not oxidize, and the current load strength and mechanical strength per unit area do not change. The current applications of carbon fiber heating cables are as follows:

Insulation and antifreeze of pipelines and tanks: Electric heating products have been vigorously promoted and widely used in China in recent years. Its application fields are mainly concentrated in petroleum, chemical industry, electric power, railway and civil or commercial buildings. With the development of China’s electric power industry, the market prospects for electric heating products with clean, non-secondary pollution electric energy as the main energy source are very broad, and at the same time, higher requirements are put forward for the performance of electric heating products. Football field lawn, public green space soil insulation: solar water heater electric supplementary heater, mainly used for long-term rainy days or cold winter season, due to insufficient light, the solar water heater water temperature can not meet the needs of life and engineering, designed to supplement heat. It has strong resistance to heat, severe cold and high temperature and humidity, and has the function of preventing dry burning. Even if the water tank is short of water and energized by mistake, the electric heater and water tank will not be burned out, so safe use can be ensured.

(2) Development and application of carbon fiber composite core wire
my country is a power-deficient country. Not only is the development of the power generation industry lagging behind, but the shortcomings of the power transmission industry have also emerged. Transmission lines have been unable to withstand the demand for rapid expansion of transmission capacity. Power outages and outages caused by overloads frequently occur. As the “bottleneck” in the development of the electric power industry, all countries are studying new types of wires for overhead transmission circuits to replace traditional steel-cored aluminum stranded wires, and carbon fiber composite core wires have emerged from this. Compared with steel core aluminum stranded wire, carbon fiber composite core wire has the following advantages:
1. Compared with ACSR cables of the same diameter, it can provide double current carrying capacity.
2. Effectively solve the problem of cable sagging.
3. It can work at higher temperatures, up to 200°C.
4. The wire core can resist corrosion, and there is no corrosion problem between bimetals.
5. Because it can provide higher current carrying capacity, it also effectively reduces engineering costs.
6. Compared with traditional cables of the same diameter, it can accommodate 28 more conductors.
7. High-strength cores can effectively reduce the number of cable racks or reduce the height of the cable racks.
8. Effectively reduce cable sagging and make ground creatures safer.

In addition to the above-mentioned advantages, it can also reduce the power loss in transmission, reduce the number of towers by 20, save land, reduce the consumption of non-ferrous metal resources, and help construct a safe, environmentally friendly, efficient and economical transmission network.

At present, only the United States and Japan have developed this new type of wire in the world, and they have also reached a tacit agreement: If it is not exported to a third country, the output of a Japanese carbon fiber wire company will account for about 40 in the world.

At present, my country’s Wire and Cable Research Institute, Electric Power Building Research Institute, and State Grid Corporation of China have all started experimental research work on ACCC wires. Domestic cable manufacturers have also increased their cooperation with foreign parties to introduce this new type of cable to China for production, and actively promote the technological revolution of my country’s overhead transmission lines. Recently, Fujian Power Grid has erected and operated this new type of conductor.

(3) Possibility of application in harsh environments such as high and low temperatures and corrosion
Carbon fiber is as thin as spider silk. The specific strength of type 3 carbon fiber is more than 62 times that of steel. It is a new generation of engineering material with good forming process. Its elasticity is high, its resistance to degeneration is more than twice that of steel, and its tensile strength is 30-40t. /cm2pa, and the specific gravity is less than one-fourth of steel and one-half of aluminum alloy. The high modulus of elasticity is 16 times larger than steel and 12 times larger than aluminum alloy cable. And carbon fiber is softer than steel. Therefore, carbon fiber can be used to strengthen the core of cables that require load-bearing and not easily damaged internal components, such as submarine optical cables. Carbon fiber can withstand a low temperature of -180°C. Under this condition, many materials become very brittle, and even strong steel becomes more easily broken than glass, while carbon fiber is still very soft under this condition. Therefore, the carbon fiber composite core can be used for the design and manufacture of power transmission carriers under extremely cold conditions (such as Antarctic research, etc.). Carbon fiber has superior corrosion resistance. The strongest corrosion resistance among metals is gold and platinum. Gold and platinum will be corroded in a solution called “aqua regia” made of one part of nitric acid (concentration 70%) and three parts of sulfuric acid (concentration 39%). Sores are full of holes, but the carbon fiber in “Aqua regia” is unharmed. It provides new ideas for the design of light-duty chemical-resistant cables in various chemical environments.