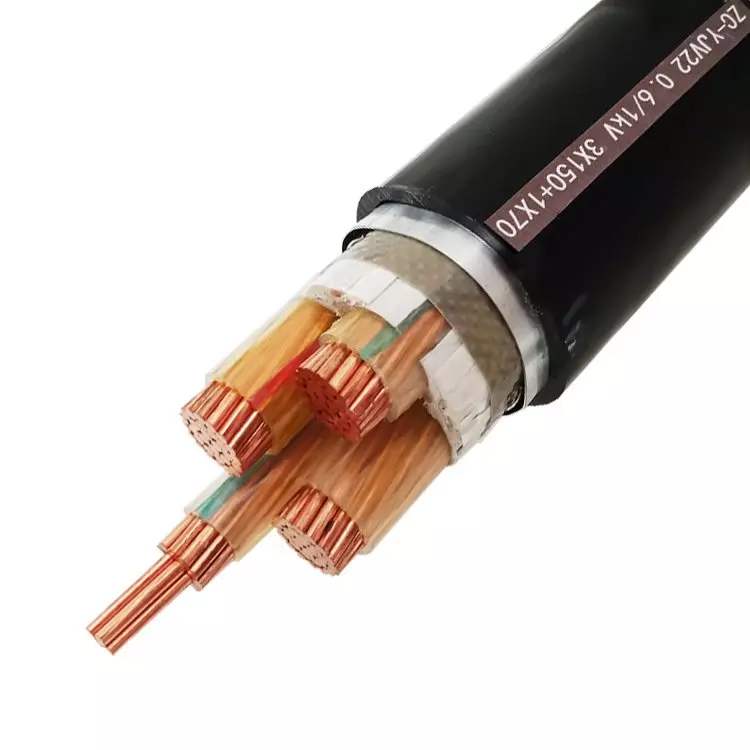 The cross-linked polyethylene cable material (XLPE) can make the aggregate structure of the insulating material in a reasonable state through the cross-linking process, and can increase the long-term working temperature of the power cable to 90 ℃, and the instantaneous short-circuit temperature is 170 ℃ ~ 250 ℃. The performance remains unchanged while other performances are improved and enhanced. Therefore, the use of cross-linked polyethylene (XLPE) insulated cables is becoming wider and wider. However, the author found in the experiment that due to the relatively small contact area between the insulating material and the conductor of the small-area cable, especially when the surface of the single-core conductor is smooth and rounded and the adhesion is insufficient, the thermal shrinkage of the insulation is large, and it is difficult to reach the national standard GB/ T12706-2008 “Rated Voltage 1kv (Um=1.2kV) to 35kV) Extruded Insulated Power Cable,such as 1-35kV underground armoured power cable , and Accessories” stipulates the requirement of not more than 4%, and the cable with larger area and higher voltage level is due to insulation and conductor It is easier to pass the test if the contact area is larger and the insulation thickness is larger.
Cables that fail the insulation heat shrinkage test are prolonged during use. Because of the excessive shrinkage caused by the insulation, the conductors may be exposed, which may cause the danger of telephone calls. Therefore, we must try our best to solve the problems in the production and improve the product quality of the cable.
So what factors will affect the insulation thermal shrinkage, and what causes the insulation thermal shrinkage test to fail?

PE is a crystalline polymer that is subjected to shearing and traction stretching under a heated environment (melting temperature), which makes the crystal grains of PE molecules increase in size along the stretching direction (longitudinal) and decrease in lateral size. The ordering is improved, that is, PE molecules are oriented, which increases the number of crystal nuclei, shortens the crystallization time, and increases the crystallinity and strengthens the orientation. However, when the finished XLPE insulated cable is placed at room temperature, the internal stress (shrinkage stress) generated during the extrusion of the XLPE insulation increases, which makes the crystallized XLPE molecules easy to de-orientate (the trend of shrinking). These factors, and Mainly related to the melting temperature and time, cooling rate, and external force (traction and stretching) in these three aspects: 3) External force (traction and stretching)
In the cable insulation production process, the molecules are oriented along the force side under the action of external force (traction and stretching), which will promote the formation of nuclei, increase the speed of crystal nucleus generation, increase the number of crystal nuclei, and shorten the knot time and crystal Degree increases. Extrusion tube extrusion is commonly used in current electric winding production enterprises. Compared with extrusion molds, the insulation heat recovery of Si-XLPE insulated electric windings produced by extrusion tube molds that must be stretched during the extrusion process It is much larger. The disadvantage of the poor compactness of the plastic layer of the extrusion tube extrusion is likely to cause the marginal heat shrinkage test to fail, but because the process inspection and final inspection do not do the type test item, the insulation heat shrinkage test is ignored, even if it is extrusion In order to improve the production speed and the smoothness of the extrusion surface, the compression mold is generally several millimeters larger than the insulation outer diameter of the cable. In this way, the insulation outer diameter is ensured during the insulation production process, and insulation is inevitable. It will be stretched, and the molecules are still affected by external forces during the stretching process, resulting in orientation, which makes the insulation thermal shrinkage of the produced cable also larger, even far exceeding the standard requirements.